For the health conscious early risers in the state of Kerala, the rabid menace of stray dogs serves as a dampener to their morning exercise routine. Over the past month, more than 300 cases of dog bites have been registered in the state capital, Thiruvananthapuram alone, majority being joggers and morning walkers. Official records state that over 40,000 people have been bitten by strays in the last eight months. Buoyed by widespread public outrage, the state administration found a quick fix solution to control the fast escalating crisis- large scale culling of ‘aggressive’ stray dogs in the state.

Aghast at the inhumane decision to exterminate wandering street dogs, animal activists joined the fray to convince the government to reverse its stand. However, unlike the usual Malayalee practice of protest marches and hunger strikes, they’ve adopted an unconventional method to besmirch the state’s public image and hit it where it hurts most, Kerala’s prized tourism industry.

What do you think?

For several days now, the global #BoycottKerala movement has gained traction, with nationwide demonstrations being held, against the state and its seemingly knee-jerk reaction.

While public opinion in Kerala remains sharply divided with those bitten by dogs baying for blood and animal activists rallying in alarm, an objective analysis, sans myopic emotions, would help understand the situation better.

What do you think? Why has the problem of stray dogs become so rampant?

Way back in 2007, Bangalore suffered a similar problem and roped in ‘expert’ dog catchers from Kerala to control the situation. For a region adept at containing its own dog population and offering support to those in need, the recent incidents of dog bites betray a larger civic malfunction than mere accelerating canine birth rate.

As per a government survey, the number of meat consumers in Kerala has increased rapidly even when the cattle and poultry population show a declining trend. Of all the slaughter houses and meat stalls in Kerala, 75.3% are operating without a license, while about 5000 stalls do not have adequate facilities for waste disposal. Often, these shops operate in the open, under unhygienic conditions, and become feeding grounds for stray dogs. Ill-equipped, without any rule to crackdown on these illegal structures, the municipal and state authorities have inadvertently facilitated the dog menace in the state.

The story of open garbage dumps, teeming with organic and inorganic wastes, in an urban locale is common to most Indian cities. In a highly urbanized state like Kerala, the civic bodies are hardly grappling with the issue of waste management. With limited land fill options, the municipal corporations, in association with households have tried domestic organic waste treatment with little success. The overflowing garbage on roadsides is overrun by stray dogs, who feed and breed around it.
Moral and Ethical Constraints Overlooked

Amidst the nationwide furore against the Kerala government’s decision to kill away ‘dangerous’ canines, one of the most vocal has been the protest organised in Kolkata by animal activists. One of the organizers of “Boycott Kerala! Kolkata Protest”, Ms. Atrei Chatterjee, underscores the moral and humane constraints of culling street animals in such large numbers. Foremost in her contention with the state’s decision, is the statistics provided by the General Hospital in Cochin. According to a news report, of the 1074 dog bite cases registered at the hospital, 75.6 percent were due to pet bites. Strays accounted for only 24.4 percent. This fact lends credence to the argument against the government’s skewed decision.

Additionally, the term ‘aggressive/dangerous’ used in the new ruling issued by the state administration is largely ambiguous. It leaves a wide scope for people to kill away dogs on a whim for barking loudly or baring their fangs. It calls for closer examination of the rule to avoid misuse by the general public. 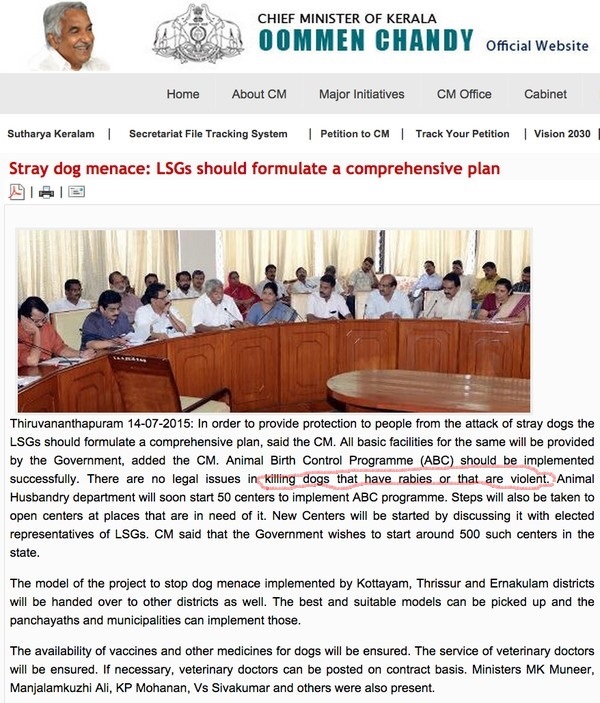 It would behave the state government to understand the long term ramifications of its actions. Culling stray dogs in an area will lead to migration of canines from the surrounding region into the vacant niche left behind. In essence, newer unknown entities will be added on, exacerbating the situation further.

The cyclic process of poisoning, electrocuting and other torturous methods of killing dogs does not require especially skilled manpower or trained personnel. The menial task of dog killers open few doors and offers little job satisfaction. The people involved in the exercise take it up as a last resort for livelihood. So, their actions are coloured by frustration which does not bode well for dogs.

The state’s lack of tenacity to adopt scientific and humane methods like sterilization and vaccination reflects in its haphazard approach towards the dog problem. The failure to arm its civic bodies with the requisite tools, or workforce to perform scientific sterilizations, is another reason for the quick decision. Most of these humane practices require greater funds than the present amount allocated by municipalities and corporations, which has been conveniently overlooked.

Therefore, in a bid to shirk its moral responsibilities, the government adopts the simplest and most populist of escape routes–culling of stray dogs. The real and online backlash is yet to come, if the obstinate stand continues, and it may lead to an irreparable global image crisis for the state.

One thought on “Protest: Culling is just plain wrong”