On 5th June , Sunday while on a walk with our dogs, KK and Harsh noticed a lifeless doggy lying in a corner. As we went close and tried to understand if she was ok. We realized she was almost dead and wafer thin. As it felt right , KK fed her some marie biscuits and placed a bowl of water. She finished half of the bowl and a full packet of biscuits. She was starved and parched to the extreme. Picked her up.. she did not fight it.. put her in the car.

Being a Sunday evening and no vets , we did basic first aid at KK and Harsh’s home and with the help of a vet over the phone started her on antibiotics. Fed her some food and water. She ate . Looked like she had not eaten for days.. many days. As we looked closely at her wounds we realized; in most probability it was a hit and run case. How mean humans are. But that’s another story for another time .

At night , while the world was asleep she woke up and started yelping .. loud .. and in pain…We cried with her. It was heartbreaking to see her in so much pain. Suddenly Harsh realized that it could be that she wanted to poop but could not as she could not stand . So he suspended her in the air and yes she pooped . She went back to sleep peacefully after that .

At first we thought we would be able to look after her and get her back to health at home .. but 2 nights of yelping and discomfort , made us realize she needs 24*7 attention . Who better than VINOD could we think of . He’s an angel for these animals. Works selflessly for their cause. With huge help from Dr . Anushree , BOBI.. is much better and recovering at PETS FORCE with Vinod. Her blood reports tested negative for distemper but her diagnosis mostly is of a hip fracture because of the hit on it. Her WBC count is 50000 where as it should not be more than 19000. Which tells us there’s a lot of infection inside of her.

She’s severely anaemic too.. but all the meds and all our love will cure her . Vinod even helped her to stand and walk a little . Felt like a miracle to us. His touch itself is like magic to these poor animals.Thank you Vinod and we hope to see BOBI out soon ♡ 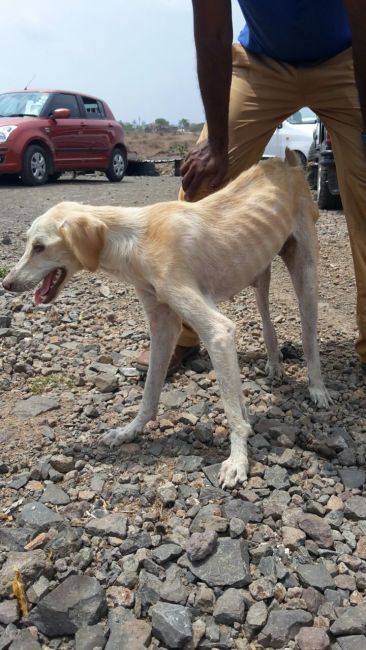