Does your society say no to keeping pets at home? Did you face bizarre restrictions when you decided to bring home a pet, like not taking them in lifts or banning them from certain areas of the society? Well, the Animal Welfare Board of India’s (AWBI) latest guidelines say that no housing society or apartment complex can come up with any such rules or laws.

Why it came about: Increasing complaints
Recently, the AWBI was quoted as saying, “You cannot ban the keeping of pet dogs by residents nor disallow the pet from using the society lift or parks. One cannot cite the barking of a dog as a valid and compelling reason for any sought of ban.” While this has come as a welcome relief for pet owners and lovers, there are many societies in the city where they disregard the sentiments of these people. T Anuradha of PFA (People For Animals) has been fighting for pets’ rights since 15 years. “We have seen lots of complaints against animals and some of them are wrong. What about people playing blaring music and television sets or even drunkards shouting and making a nuisance in societies? Why don’t they say anything about that? Let us not forget that Article 21 is about the right to life and liberty and this extends to our animals as well.”

Adds Nilesh Bhanage, animal rights activist of PAWS (Plant and Animals Welfare Society), “Every now and then, my NGO has to send notices out to societies regarding problems with feeding strays or letting them take a walk in the compound or use the building lifts. Did you know this mentality is more in educated people? It is highly unfair and this ruling of AWBI is great.”

Sachin Bangera of PETA, India, says, “As much as we wish that landlords and housing societies treated all members of their tenants’ families respectfully, regardless of their species, this isn’t always the case. Housing societies do not have the right to form laws regarding pets, yet some have refused to rent to people who have cats or dogs, and others have suddenly adopted “no-animals-allowed” policies, forcing current tenants who have animal companions to either get rid of their animals or move out.”

Not allowed in the elevator
Rajeev Ramagopal, graphic artist, almost lost his pet Labrador. “We have had our dog for over a decade now. With age, he has lost a lot of energy and because of diabetes, one of his legs doesn’t function fully at times. On a particular day, when he was very unwell, we were not allowed to take him in the lift, despite us telling everyone that it was an emergency. We had to carry him down six floors and it was a lot of exertion for him too. Luckily, the vet could save him on time,” says Rajeev.

Another case is of a person in Navi Mumbai who has a paraplegic Labrador. “The owner wanted to take him down to relieve himself,” says Bhanage. “Since he was unwell, he had to use the elevator, but the housing society objected to it. He took them to the consumer court stating that he had paid special lift charges and that the dog was their family member, so he should be permitted the use. The matter went in his favour and the society had to pay him a fine of Rs 5,000. In another instance in Dombivali, some kids in the society were threatening and teasing the pet animals. We sent a notice to the society that they must not be allowed to harm or threaten them,” he informs.

Ultimately, it’s important for animal lovers to understand their rights, says Sachin. “Renters must know their rights. Animal welfare groups receive calls and emails from individuals from across India complaining about their society making life difficult for them just because they have companion dogs or cats or feed strays. We often help them by explaining that no society can have such rules. We also direct individuals to AWBI with such cases. AWBI sends notices to the societies, which act as a deterrent against unfair steps towards pet owners. AWBI has also created a special ID card for people who feed strays, but it should be noted that people do not need the card; anyone can feed strays.”

I had to shift my cats out: Zareen Khan
Actress Zareen Khan recently faced a problem from her housing society, when they complained against her having too many cats. “Some people even tried to get me out, by reaching out to tabloids and spreading news about me ill-treating my pets. I was forced to shift all my cats to my other apartment, five minutes away from where I live. While they’re pampered living in an air-conditioned home with a caretaker, I’m worried as I’m not with them. I’ve installed cameras to keep track of them and spend as much time as I can with them,” she says.
There are many people like Zareen who have faced issues when it comes to keeping pets in their housing society. “I live in Bandra, in a good housing society. Since I’ve had pets all my life, when I moved to this city, I decided to adopt a pug. There were no issues initially. But, in two months, my society suddenly issued a circular that read, ‘No dogs that bark will be allowed as pets’. This was rather absurd, it is like saying no humans who talk will be kept as tenants. We fought, took the help of animal authorities and my neighbours luckily stood by me. My dog lives with us in the same society today,” says Shruti P, copywriter in an ad agency. 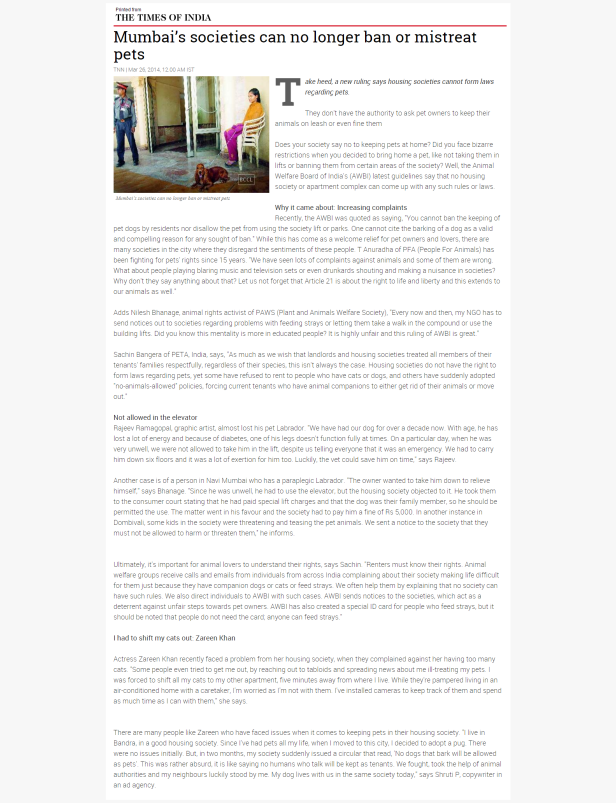